Vintage tag ~ a tribute to my Dad

Vintage
I didn't quite make the Vintage theme on 'Tag Tuesday' but as this one was more challenging for me so good to do it.
Thinking perhaps something incorporating vintage buttons, as I love them and have a few in my collection, I had a rake in my Mothers old button box which she gave to me a while back.
When I opened it I found these, and knew I had found my vintage subject.
These lovely Cream Bakelite numerals from the front door of our family home.
My parents moved into their new home in December 1957, I wasn't born until 1965 but
I remember them being on the painted red door vaguely when I was a child,
As trends changed the door was replaced with a varnished wood one and the numerals with shiny new brass ones.
So the cream ones found their way into the button box and they became a part of it, so fitting that they should still be in the box when she gave it to me, and now I can give them pride of place on my vintage tag. 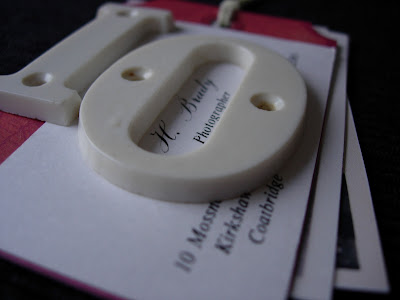 On a red luggage tag with one of my Fathers vintage business cards.
My father was a photographer since before I was born, given a camera at the age of 5 by his brother James who was moving to USA to live. He was artistic at heart and photography was his passion. He built his own darkroom in the attic at No 10 and we spent many a winters evening and weekends playing in one end of the attic space which he had made our playroom, while he developed, printed and mounted his photographs into albums at the other end. 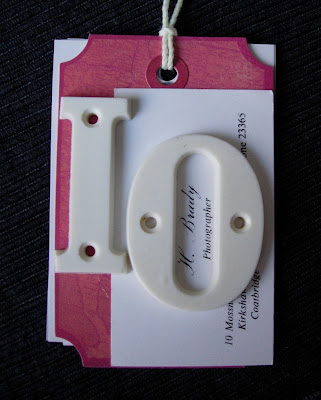 My Father worked full time in various jobs first in the bolt work (he always used to tell us how he helped make the bolts for the Queen Mary or the 534 as it was known) then as a machine operator in Ranco which I believe made thermostats. Then when I was nine he and my mum decided to go self employed and run their own grocer/newsagent shop.
His photography was a second income for him to meet the demands of a large family. Most Saturdays he would have a wedding booked.
He provided affordable wedding, and passport photographs to family, friends & work colleagues.
His work was well know in the area.
There was occasions where I would meet someone who would tell me that my father had took 3 generations of wedding photographs in their family :)
I am so proud of this.
It is also to his credit that we have a large collection of family photographs, and I reciently found a box of developed rolls of film carefully wrapped in foils yet to be printed, some of which are pictures taken of me as a baby just a day or two old in the hospital.
Im looking forward to having these printed.

I thought it only fitting to turn this little tag into an album. 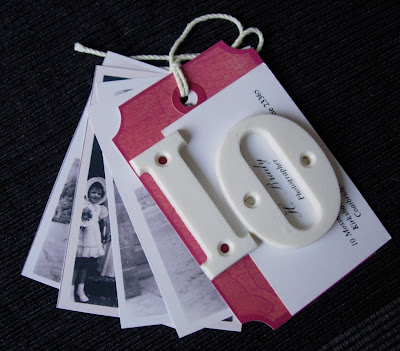 with copies images of photographs he developed and printed himself. 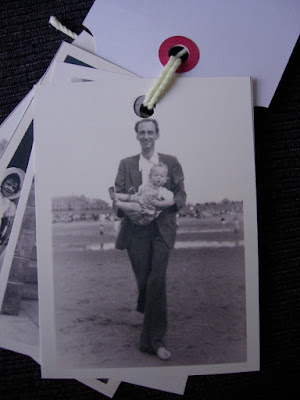 This is my Dad holding my eldest sister Theresa his first child
I love this picture he looks so happy and carefree in it, captured by my Mother on a day at the beach.
The next two are of my Mother and Father, both taken not long after their engagement. 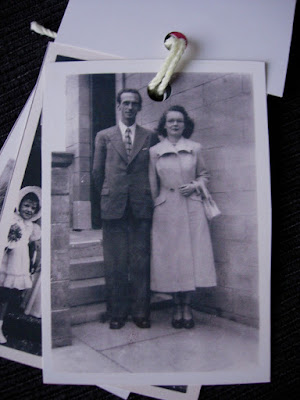 I love the style ..... especially my Mums suit which had a velvet collar. 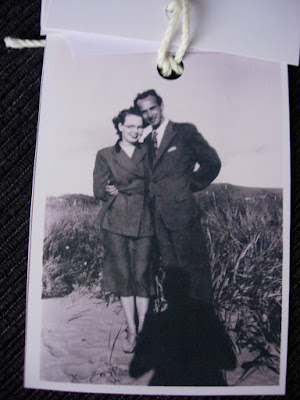 I also love that Shadow of his friend taking the picture :)

I also included this wedding shot, not one of my dads but its a great picture. 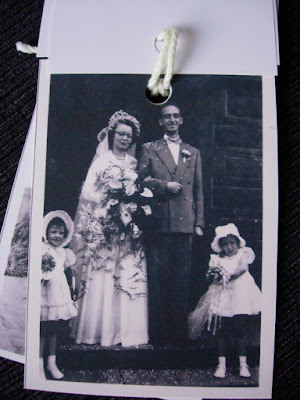 All photographs are copies of the originals printed on photographic printed paper.
Vintage Tag created as a tribute In memory of my Father
Henry Brady 26th May 1917 ~ 8th October 2004
Thanks for stopping by :)
Yvonne x
Posted by Yvonne Moxon at 11:19

Beautiful memories and fabulous photos.... thanks for sharing them..
Hugs
Christine x

Thats a beautiful post. It looks like your parents and mine were the same age! My dad did photography too in his spare time. He had a little deckle edge guillotine and all the photos are prettily edged. Sadly he discovered transparencies and so all the later photos of our lives need a projector to view. Much as our descendants will need a computer to view ours!

This is wonderful--I love how very personal you made this tag and hearing the stories of your father!

Thanks Jackie, imagin that! my Dad too loved transparencies, Mum still has over 1000 slides, many of my baby pictures are among them and he recorded our holidays on them. We used to love it when he got out the slides, they are wonderful and I found out that if you take a picture of the projected image with a digital camera....hey presto it gives a great enlargable copy! Your Fathers deckle edge guillotine sounds lovely, something indeed to hold on too I have never seen one. Thank you for visiting.
Yvonnex

I love what you have done to create an album tag. My dad was a keen photographer and used our attic for developing his photos. He, too, took transparencies and started scanning them onto his computer so that it was easier to view them. I've copied a studio photo of him to use on one of my vintage tabs and one he took of his mother on the other. I think what we've done with our tags is a great way of using our photos and another medium for looking at them - gets them out of the album so to speak.

Your right Fiona, it does get them out of the album, or in my case the box....we have so many! My Father never used a computer, even tho they wera around and he was amazed at the welth of information that was available from the internet, he was just to tired I think to venture there. Thank you for taking the time to visit and comment. Yvonne x

Oh this is so wonderful Yvonne ... absolutely perfect for our vintage theme and a wonderful keepsake of memories. How lovely to have this! With best wishes, Carolyn ♥

what an absolutely fabulous tag. I love the little photo collection, what a great way to keep the memories alive. xx