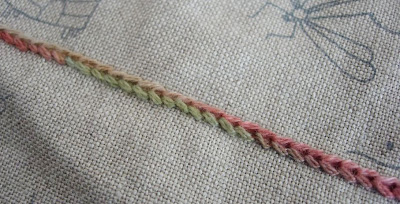 under the beehive and insects row ....

then I stitched a double knot row under the letters,
I used a Caron 'Autumn Leaves' 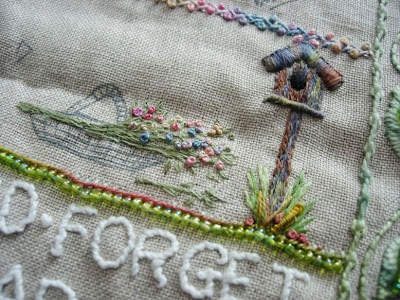 on the row above I stitched a row of beaded blanket stitch, however the beads covered up most of the stitching, should probably have used a darker colour, I used the Caron 'Lemon and Lime', so I whipped it with another, more colourful thread just above the beads called Chameleon 'Summer garden'
You can also see I have completed the birdhouse and grasses below and began stitching on the flower basket next to it, the next stage of this bit is the basket which will be done in bullion knots so I might leave it until I have completed all the other more flat embroidery and put it back onto the larger frame.

EG Airdrie branch meet again tonight, I was supposed to have some stitching on my Cretan door to show you but I found it difficult to concentrate on it with so much chat and demos going on so I only did a small amount, tonight I will probably do some more on the sampler or my needlepoint nest which I worked on a little at Tuesday's meeting with Fife branch while we discussed ways to display all our 'Houses'.
Posted by Yvonne Moxon at 16:26

Ooh, it's coming on apace simply beautifully Yvonne. That birdhouse is just adorable and the colours are all amazing :0) Mo xx

I love the thread in the top picture's border - the color and the stitching look so rich.