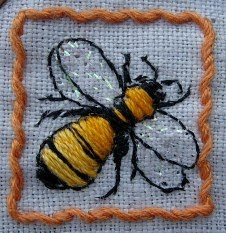 A month ago now, on the 1st April, I decided to get back on track with my blog, I had to make the time because I was missing the creative inspiration that I get from visiting all my favourite blogs. I spent a bit of the morning browsing and catching up, I even signed up to do the 39 squares even if I was a little late it would get a needle in my hand again.
At around 12.30 my sister called me with tragic news. Her youngest Daughter Bianca had died that morning around 11.30 am in her flat. It was tragic news that was very difficult to take in. At first we did not know, and still don't know how she died, we were not allowed to see her and my sister and her husband were devastated, still trying to get their heads round the fact that 'B' was gone. we know that she was not alone when she died that there were others with her and we know that paramedics fought hard to try to save her. A post mortem was carried out on the 15th. It was the 23rd before we were able to have a funeral and the long wait has been hard on everyone.
Bianca was a sweet mischievous child who was in no hurry to grow up. She kept close to her mother always, my sister could not move at times without tripping over her, as she got older she enjoyed school. She was bright, intelligent studied languages at school and was clever at maths. At 17 she had a little boy, it was tough being a single mum and my sister helped her care for the baby as Bianca worked part time. She decided that she wanted to pursue a career in nursing. Sadly it became impossible to keep up with her studies as she battled with mental health issues.
It took a long time for the health authorities to recognise that Bianca actually had mental heath problems, each time she would arrive at hospital in a deranged or raged state they would declare that she had a drink problem, keep her for a couple of days and then send her back home. My sister fought hard to help her taking on the full care and responsibility for her grandson. There were many difficult times for her but through it all she loved and tried to do the best she could for 'B'. By the time the doctors finally admitted that 'B' had a mental health problem it was too late to do anything about it. I wont go into details there is no point and I don't want to invade my family's privacy. But... it is this that makes it difficult for me to accept that such a young life was taken from us and a little boy has lost his mother. She was 28yrs old
When my father died 6 years ago I felt sad and I miss him deeply every day, but I was thankful that he was given the good health to live such a full life and at 87 he deserved to die peacefully after such a long and hardworking life, it was his time and I was grateful that he lived this long
When a young person dies, your sisters child! my God daughter, its so hard to accept, such a short life, such a difficult life, I don't want to be outliving my sisters children its not right, and I miss her so much and I don't want to stop caring about her and wondering how she is. Even though I know now that she is at peace and her struggle is over its still hard to accept that she will no longer be there in our lives. I will always ask the question 'why her?'
It just didn't feel right to start blogging again and not mention anything about the last month and the fact that I have spent as much time as possible, under the circumstances, in my little studio getting lost in my thoughts about Bianca whilst stitching away.
The day after she died I gathered all the little pieces of pink fabric that were laying around left over from the bunting banners I made for the girls 1st birthday and I started piecing them into a little crazy quilt (pictured below) I then took the tiny scraps and made some inchies (pictured below) Next I gathered the tiny blue pieces and started another batch of inchies (pictured below unfinished) these blue ones are for my sister her birthday is tomorrow 1st May.....what do you say in a birthday card to your sister when she has just lost her child.......I'm lost for those words.
Posted by Yvonne Moxon at 16:02